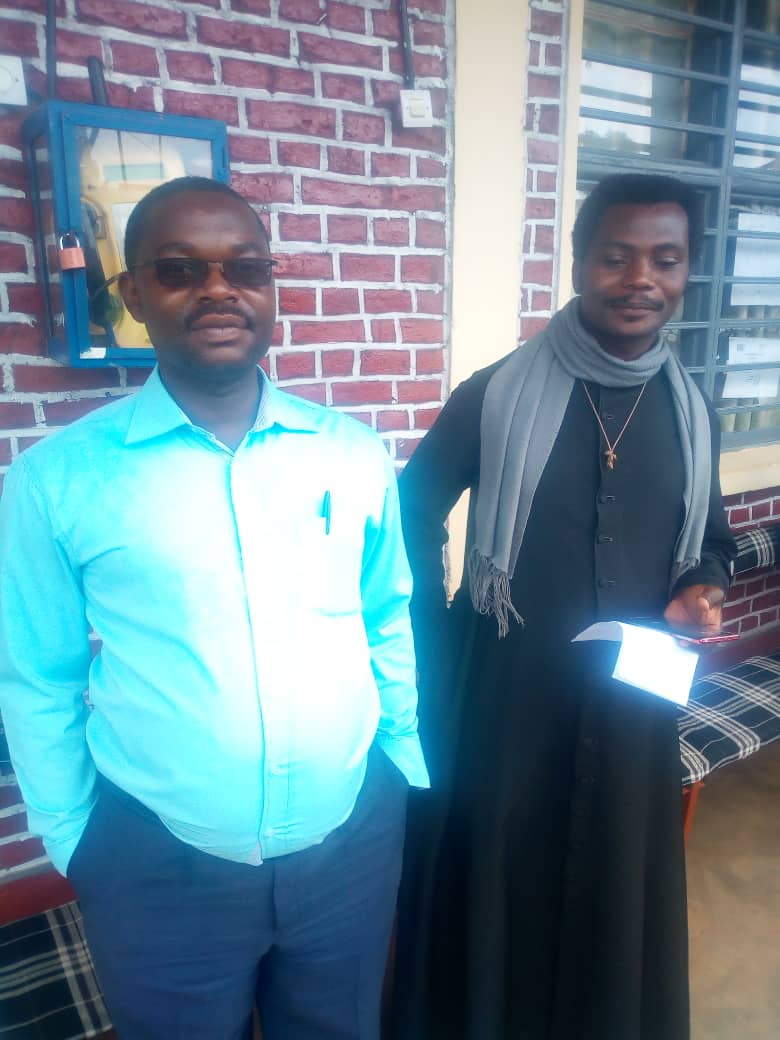 On behalf of Kabaya Catholic Christian community, we would like to sincerely thank all partners, benefactors and members of JYA MBERE foundation who generally participated in  buying the school materials for 35 pupils in primary studies and  particularly in paying the school fees for 3 orphan Children ( NAYITURIKI Valentine, MANIRIHO Domina and TUMUSIFU Joice) who are now in boarding schools (Secondary). If their efforts were not combined, these students wouldn’t have gone to school.

Our KABAYA catholic Parish is located in  Rwanda,  Western Province, NGORORERO District. In ecclesiastical point of view, it is located in NYUNDO Catholic Diocese.  Inside our parish we have 11 catholic schools which are undercontrolled by the authority of the parish, but 10 of them are helped by the gouverment of the Republic of Rwanda. We call them also the schools “Government aided”.  One of those 11 is a private school. The Government of Rwanda helps the Catholic church  education in  paying the salaries  of teachers, building some classrooms and paying other  basic school materials.  In the School year 2018,  we had 10750 pupils at those schools. Among the pupils, most of them are very poor and others are orphans.

Since the school year 2013, the JYA MBERE Foundation from Netherland Country helped a big number of needy,   vulnerable and orphans children on those schools. It offered them different school materials such as school uniforms, shoes, school bags, mathematical boxes, notebooks, pens … The finalists from primary schools often claimed that it would be better to continue with the secondary schools but they had not the possibility for doing it. At this level, many times, they leave the schools.  They already know that  the elementary study  is insufficient to have the knowledge of self-care but without the means, we can not do anything.  They are discouraged. And that is undurstandable because in primary schools, they learn only the basic notions of writing, reading and couting.  They learn the subjects which help them to take care of themselves at least in secondary school.

Now the answer to this wish is found. The three best perfomers are allowed to attend the secondary school. This is a great chance and this fact will encourage other helped children  to succeed  very well. I know well that the JYA MBERE Foundation spared no effort to do much more than it could have done. We are very pleased to express our gratirtude that other benefactors have agreed to sponsor those 3 best winners in secondary schools. Special gratitude is addressed to Madam NYIRAMPUNGA Beatrice, the Coordinator of JYA MBERE Foundation. Her valuable effort to seek donors cannot be underestimated.

We would also like to thank the entire team composed by the committee and all the members who help the coordinator of JYA MBERE foundation to achieve its objectives to help the poor.

We would like to conclude by thanking everyone who contributes at different levels to the support of these children.  Our thanks are also extended to any person of good will who has kindly helped these children mentioned above and whose name is not explicitly mentioned on this page. We thank you all. May Almighty God bless you all.

Mr. Tautvydas Totò Rindzevicius (Toto) from July 8 to July 31 visited the project in Rwanda and pursued the sponsored children. Toto is Swedish and has Jyambere approached because he wanted to volunteer to contribute to the goals of Jyambere. He has done a lot of work in Rwanda and has an extensive record of this. He stressed the importance of the work of Jyambere and he pleaded for more aid, which should go beyond the coverage of educational and medical expenses.

He reported that many children receive one meal a day, no chair / table at home for them to do homework, sleeping on the ground and need help after school to earn a living. Sometimes the uniforms donated by Jyambere are the only clothes they have. Consequently, many children are often sick, tired or dizzy in the classroom. In the short term Jyambere should support families with clothes, mattresses, mosquito nets, tables, chairs and gas oil lamps. Toto’s report can be read here.

Jyambere earned a sum of € 231.25 with the card action. We want to thank everyone who participated in this action! In the future, you can continue to order these cards with us.